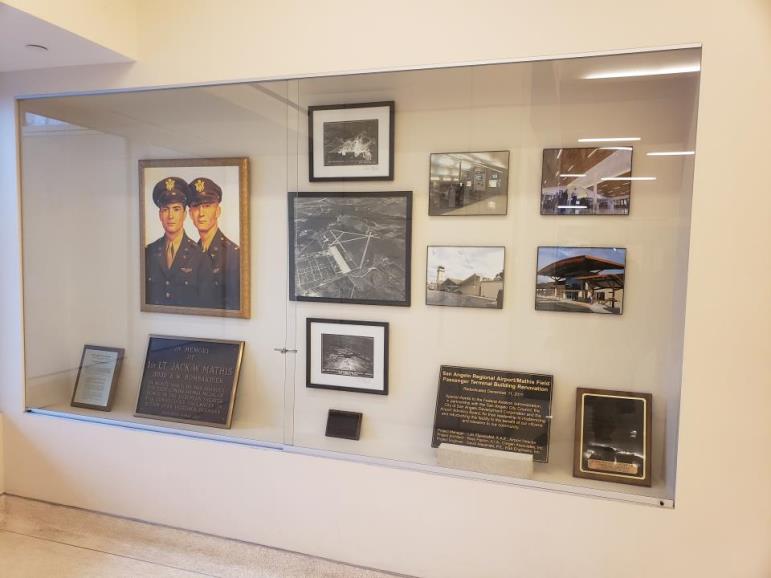 Few realize the history Mathis Field has played for the City of San Angelo, the region and our Nation. Created long ago as Carr Field, it quickly became a military training center; it's name changing repeatedly including Concho Army Air Field, San Angelo Army Air Field, and finally, after WWII, it was designated Mathis Field.

Now going by the dual name of San Angelo Regional Airport -Mathis Field a little research reveals that we have an incredible history since our inception. . .

Out Yonder.
By Ross McSwain

A group of veteran airmen renewed past friendships, talked of their civilian and military careers, and recalled days of glory and sadness over the skies of Europe when former members of the 303rd Bomb Group came to San Angelo last week to honor two comrades lost in World War II.

The gathering of former members of the "Hell's Angels" at Mathis Field was not of the notorious motorcyclists, but that of a few pilots, bombardiers and the crewmen who manned the B-17 bombers of the 359th Squadron. They came to dedicate a plaque in memory of the late Lt. Jack W. Mathis of San Angelo, who in 1943 was the first airman to earn the Congressional Medal of Honor.

The plaque that now graces the Mathis Field terminal building entryway was first placed in a Tucson, Ariz., airbase hospital to memorialize Mathis when the 303rd Bomb Group was reactivated. However, association members believed the plaque belonged in San Angelo where the city's municipal airport was named for the two Mathis brothers.

Jack Mathis, a student at San Angelo Business College before entering the Army Air Corps in 1942, was the lead bombardier on a 100-plane mission over the Bremen-Vulkan, submarine yards at Vegesack, Germany.

As lead bombardier, Mathis homed in on the target, and the other B-17s in the flight came after him in a deadly game of follow the leader.

Only moments before reaching the critical point to release the planeload of bombs, the aircraft's nose was hit by an anti-aircraft cannon shell. Mathis was mortally wounded, suffering a gaping wound in his side and stomach and a smashed right arm. His body was blown backward into a bulkhead, away from his bombsight.

According to the award citation posthumously given him several months later, "Lt. Mathis, by sheer determination and willpower, though mortally wounded, dragged himself back to his bombsight, released his bombs, and then died at his post."

That March morning, the 303rd Bomber Group scored one of the most accurate raids of the war and put the German U-boat yards out of action for six weeks.

Quiet spoken Bill Calhoun, an Alabama native now living in Fort Worth, was Mathis' commanding officer and played a major role in the saga of the Mathis brothers. He remembers the details as if they happened yesterday.

The day before Jack Mathis left Molesworth Air Base on his 15th and last bombardier mission, he had spent the evening with his, older brother, Lt. Mark Mathis, a newly trained bombardier himself who had just arrived in England for duty with another unit.

Calhoun had arranged for Mark Mathis to come to Molesworth by plane for the visit with his brother. "They were great boys," he recalled fondly, his eyes glistening with tears.

Calhoun recalled that morning when young Mathis' body was taken from the B-17 bomber named "The Duchess."

He gathered the necessary documents and made the recommendation for Mathis to receive the Medal of Honor. He also had to write the young flyer's family and tell them about his death.

"That was never an easy job, having to write the families," Calhoun recalled.

After Jack Mathis was killed, Calhoun helped Mark Mathis to get a transfer to the 359th Squadron.

The older Mathis, though inexperienced, requested to be assigned to the Duchess. Calhoun allowed Mark Mathis to fly on Jack's old plane several times, but he served with a different crew rather than with the men who were on board with his brother.

"It would have been too hard on those boys for him to be flying with them," he said.

A short time later, Calhoun watched Mark Mathis' B-17, named the "FDR," go down in the North Sea after German fighter planes shot it to pieces. The plane had just completed a bomb run over Kiev — Mark Mathis' fourth bombing mission.

Although seven crewmen were seen to parachute from the stricken bomber, no survivors were found. The North Sea waters, only a few degrees above the freezing point, killed crewmen within minutes if they were not pulled from the sea quickly by rescue boats.

Now Calhoun had to write the Mathis family again, and the second letter was "much tougher than the first," he said.

"That second letter to the Mathis family was so much harder to write," Calhoun said.

There were many other stories related about the Mathis brothers during the afternoon — both were good-natured pranksters, but serious about doing their duty during the war, comrades said.

Harold Susskind of Austin served as a navigator in the squadron a short time after Mathis' death. Susskind was a crewman on the Duchess when the battered aircraft flew its 50th mission, one of the bloodiest raids of the war.

According to Susskind, the old airplane had what seemed to be a private war with the Nazis. After getting a fresh coat of paint over its well-patched metal, the plane flew seven additional missions before finally being retired from combat.

But two other B-17s carried on the aircraft's indestructible tradition. One was' called the "Duchess' Daughter" and the second the "Duchess' Granddaughter."

Over forty years ago, the San Angelo City Commission passed a resolution to consider offers for the establishment of a city airport in or near San Angelo.

Ultimately, an agreement was made with West Texas Utilities to purchase 670 acres of covered rangeland located on Knickerbocker Road near Lake Nasworthy. Clearing away the mesquite thickets and grass burr covering was the first priority for the Work Projects Administration after a $363,922 federal airport building project was approved.

By June of the following year, the first Municipal Airport Runway ad been cleared an area 650' wide and 1500' long. In the process of clearing the new runway, 47 cords of wood had been stacked. By this time, the number of WPA workers had jumped to 300 men. In the fall of 1941, an additional federal grant of over $38,000 was approved to provide lighting facilities for the field. In November, the Standard-Times revealed that the new airport, which was given the name of Carr Field, would be completed in less than a month. When World War II came before it was finished, city officials turned to the Army Air Corps.

In March 1942, Senators Tom Connally and W. Lee O'Daniel announced that the Army would establish an Air Corps Traiing Center on the site. To facilitate the influx of men and equipment, Carr Field was to be expanded and new buildings constructed at an estimated cost of $5 million.

In the end, it is believed that a great deal more than the original $5 million was expended in construction costs by the federal government between 1942 and 1947. Four 5500 foot runways with connecting taxiways and a 575' x 3600' concrete airplane parking ramp were constructed on the airfield. Over 250 buildings and 7 large hangars were also added to the city-owned and lease property. Together with complete water, sewer, electric and gas utilities, the airfield served over 4,000 military personnel.

It is clear that the airport was a very successful and beneficial war-time flying and training center. During this time, Carr Field was renamed Mathis field in honor of Lieutenant Jack Mathis, who was posthumously awarded the Congressional Medal of Honor for Valor during the War.

Ultimately, a transfer agreement was arranged after the war which allowed the City of San Angelo to reclaim its original 673.66 acres and also retain a lease on 896.7 acres of Washington County School land. The war Assets Administration also transferred almost all government-build-and-owned airport improvements to the city.

Think back more than half a century ago, when aviation was new, a world was at war, and a young man from San Angelo had a duty to perform... 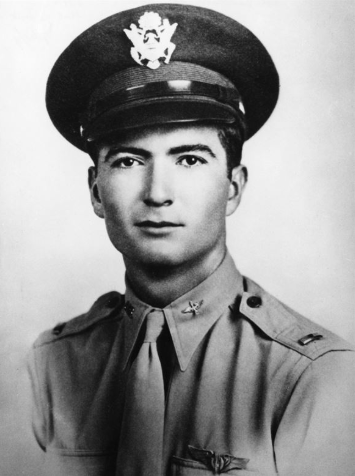 Lieutenant Jack W. Mathis won the Congressional Medal of Honor for a bombing mission on March 18, 1943,

As the lead bombardier for a group of B-17 Flying Fortresses, his job was to do the aiming for the entire squadron using new automatic flight control equipment.

Just as his aircraft, "The Duchess", started the bomb run, a direct hit from anti-aircraft fire tore through the bombardier's compartment, mortally wounding Lt. Mathis, blowing him against the rear bulkhead. With a shattered arm and a large hole in his abdomen, Lt. Mathis dragged himself back to his position, realigned the bombsight and released the bombs. They landed directly on the target, as did those released by the other planes in his formation.

As the bombs were falling, Lt. Mathis died and collapsed over his bombsight.

During this time his brother Mark was also serving as a bombardier in England. Following his brother's death, Lt. Mark Mathis asked for and received a transfer to his passed brother's squadron. He even flew missions in "The Duchess" using the same bombsight.

Unfortunately Lt. Mark Mathis was also lost and listed as "missing in action" during a mission to Kiev's shipyards.

Jack Mathis was born here in San Angelo on September 25, 1921. At the age of nineteen, he enlisted in the U.S. Army and later transferred to the Army Air Corps in 1941. He began flight training in January 1942 and graduated right here at Concho Army Air Field as a bombardier July 4, 1942. He was then commissioned as Second Lieutenant and assigned to the 303rd Bombardment Group in Salt Lake City, Utah. He moved to the United Kingdom with the group in September 1942.

In 1945, in honor of his valiant action, Concho Army Air Field was renamed Mathis Field.